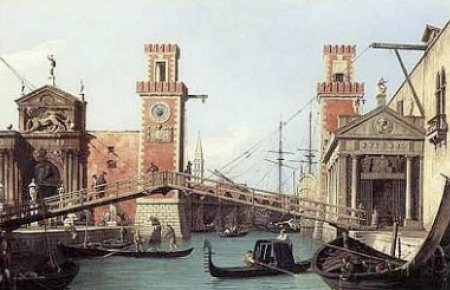 While medieval and Renaissance Venice have fascinated historians, less has been written about the city in the 17th century. This book is about the community of the workers of the Arsenal (aka the arsenalotti) from 1620 to 1670.

The Arsenal was created in the 1100s and grew steadily until the 1300s. By that time, it had became a production plant and warehouse reaching a dimension unique in Europe.

In the 17th century, the Arsenal cost 150,000 ducats per year to the government; it also employed some 3,000 master artisans. These dimensions lead to organizational issues unknown before.

Not all arsenalotti came to work every day. Indeed salaries were significantly higher in the privately owned shipyards. On the other hand, all those that did go to the Arsenal did not work: retired arsenalotti too old to work could still go to the yard in order to be paid their salary (i.e. pension).

Confronted with shortage of skill labour, the Senate gradually introduced an assembly line. The time spent as an apprentice was halved. These less-qualified workers were more docile but required numerous experienced supervisors.

To reduce the competition from the private shipyards, from 1633 onward the arsenalotti were forced to be at the Arsenal at least 150 out of 250 work days a year. An internal bidding system was also put in place (various teams proposed a price and a time and the most efficient was chosen) and allowed some teamstears to multiply their income by a factor five.

This bureaucratization went along with the introduction of an almost military discipline. This change was not easily accepted and numerous arsenalotti deserted and several revolts took place from 1580 to 1620. But the reform was finally implemented.

Yet the arsenalotti were not a sort of early modern proletariat. They managed to remain a cast of privileged artisans. After 1650, their sons (whose names were kept in a register) could automatically be accepted as apprentices after their tenth birthday.

Although the top managing roles were reserved to the city’s elite, most of the middle managing positions were filled by arsenalottis. These supervisors had a life-long contract and de facto directed the yard. To become supervisor one had to be a talented craftsman, a brave soldier, have a strong sense of civic duty, and important supports (all the way to the most prestigious patrician families).

Did the new system work?

After a long depression from 1574 to 1614, the Arsenal entered a new period of abundance. The number of workers rose back to the peaks of the previous century. The Arsenal’s fortune was not linked to economic cycles but related to defense spending triggered by the perception of the degree of danger represented by the Ottoman Empire.

On the other hand, conservative supervisors prevented any meaningful innovation to be implemented for the next 50 years. Tellingly, the Arsenal did not produce its first sail-powered warships before 1660 and remained attached to galleys.

The arsenalotti most resided in the area next to the shipyard. They seldom mixed with non-arsenalotti, and endogamy was strong. The market gardens of the neighbourhood and the gift from the Arsenal in kind led to a high degree of self-sufficiency, which in turn increased the autarchy of the group. The arsenalotti were not miserable. Dowries were quite substantial and the salary/pension guaranteed to retired workers catered for the needs of old age.

There was majority of women in this “urban village”. Some worked at the Arsenal as sail-makers. But most were self-employed as artisans, wet-nurses, or even fortune tellers. Tensions were high in this feminine world, which led to numerous denunciations to the Inquisition for witchcraft.

Embezzlement was common place at the Arsenal. Theft was difficult to distinguish from the customary payment in kind of part of the salary. Their talents as sailors and their numerous relations with the elite also made them Venice’s number one group of smugglers.

A group in the city

Since the Middle Ages, a violent custom took place every fall: the illegal yet highly popular Guerra dei Pugni. The city was divided between the Nicolettis (fishermen and gondolieri) and the Castellonis (the Arsenal workers). Open defiance to the authority, these carnavalesque incidents were a necessary ritual outburst in a city characterised by severe social inequalities.

The arsenalottis were hated by the other artisans of Venice. Even though they had significantly lower incomes, they were the Senate’s favourite community. They shared numerous traits with the noble elite (of whom they were usually clients): they were a close, bellicose cast serving the state.

They were also famed for their sense of civic duty. As marine carpenters, they were present in great numbers on the fleets (during the War of Candia, over a half of the arsenalotti joined the navy). They as well acted as special-purpose civil servants: they were the city’s firemen and were trusted with the guard of some key spots in the city such as San Marco.

The arsenalotti also had a special relationship with the doges. They even once prevented a putsh. Paradoxically, these workers were closer from the city’s ruling elite than from the rest of the people. They acted as their masters’ watchdogs and thus wakened the chances of the other artisans to force a more equal allocation of the riches upon the patricians.

This highly informative book suffers from a strong source bias. Davis chiefly used sources from the state’s records, the arsenalotti thus appear to us solely through the eyes of the government, which increases the sensation of a close autarchic community devoted to the state.

The authors approach is also highly influenced by a “class struggle” view of history. The arsenalotti are represented as a totally uniformed group betraying the working class for the vain honours offered by the patricians. At no point is there an possibility for the arsenalotti to be themselves divided in smaller groups with diverging interests, nor the possibility that stability and extra income may explain their behaviour.

Finally, the economic conjecture is dismissed a bit quickly by the author and it would have been interesting to compare the trend taking place in the Arsenal with other production systems of the time, chiefly the European textile protoindustries.

This entry was posted on Wednesday, February 4th, 2009 at 15:33 and is filed under Early Modern, Economic History, Europe, reading notes. You can follow any responses to this entry through the RSS 2.0 feed. You can leave a response, or trackback from your own site.