Park, Maarteen (2003) “Guilds and the Development of the Art Market during the Dutch Golden Age”, Simiolus: Netherlands Quarterly for the History of Art, 30/3, 236-251. 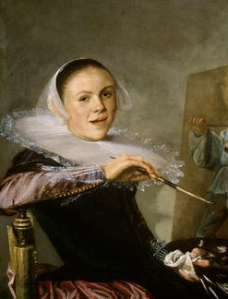 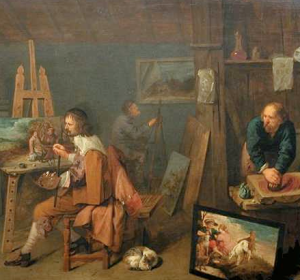 The rise of Dutch painting in the 17th century is contemporary with a dramatic expansion of the corporate system (p.236). Traditional art history sees the success of Dutch painting as a reaction against the highly idealized representation of the world provided by Italian art. Economic historians on the other hand have insisted “market forces helped shape, if not caused, the development of Dutch painting”. But supply-side factors may also have had a part in the process; guilds provided a type of organization that influenced Dutch painting.
A growth industry

Painting was already a growth industry in the 15th and 16th century in the towns of Flanders and Brabant (p.237). Numerous labour-saving techniques were pioneered there (“repeated use of the same design, cut-outs for standard elements, and collaboration between specialist workshops”, limited brushwork, limited range of colours, copies of earlier utput). The conflict that led to the independence of the Low Countries brought many of these painters to the Northern Netherlands. For instance, while there were only 75 artists in The Hague around 1600, they were 300 thirty years later, an increase consistent with the country-wide trend. Painters became so numerous and productive that some works could be sold for as little as 1 guilder, the daily wage of a skilled labourer (p.238). “The expansion of the market was accompanied by a widening range of products on offer”; specialization was pushed to extremes, guilds even recognizing perspective, seascapes and battles as established specialties. Art broking became a dynamic new profession.

The rise of Protestantism and of the Republic (that went along a emigration of the elite to the South) brought the practice of commissioning paintings to an end. The house of Orange wasn’t wealthy enough to take over (p.239). Face with the shrinking of their traditional market, Dutch painters were forced to adapt to the requirements of their new clientele: the urban middle class.

During the Dutch Revolt, the setting up of a guild was a way to make a city more attractive to migrants in their feverish competition to attract skilled workers. The Twelve Years’ Truce (1609) opened Dutch borders to the products of the Southern Netherlands, setting up a guild was there again a way to shield the local producers from foreign imports. Unsurprisingly, the largest Dutch cities created painters guilds in the years immediately the fall of Antwerp (1585) and 1609 (p.241).

Those institutions ought to have been successful since in the 1640s, the artists of Leiden bitterly complained about not being organized into a guild (p.242).

The formation of apprentices was an important component of the artists’ profession and of the guilds’ work. It seems to have taken 6 to 9 years for an apprentice to become a master once he had learned the technical aspects of the trade (the making of colours) as well as painting and sketching (p.243).

But the most important task of a guild was to regulate the production and sale of paintings in a given city. But their attempt to impose a monopole for local painters was ill-fated. Private buyers could still purchase paintings out of town (p.245). And indeed, while lower quality works could always be found locally, but for refined and peculiar paintings a client often had to look elsewhere. Worse even, art dealers were members of the guild and as such allowed to sell whatever they wanted in town including works from other places (p.246).

Faced with out-of-town competition local artists opted for aggressive marketing techniques including auctions, the sale of paintings as prizes in lotteries, etc. as a result 50 to 80% of the collections in the various Dutch towns could be attributed to local artists. Of course the wealthier a city the most likely it was for a collector to purchase works from outsiders and even foreigners. But this situation was identical in Leiden where no guild was founded before 1648. This casts a shadow of doubt on the actual impact of corporative control. It is likely to have been particularly important for lesser masters more dependent on local demand.

Guilds were also designed to diminish the asymmetrical relationship between the painter and his client. Indeed, the inability to judge whether a piece was an original may have led to a “buyers’ strike”, specially for the high end market (p.247). A master painter was supposed to provided two or three paintings of his own hand to the guild’s shop and replace them as they were sold. This offered both the guild’s expertise and the possibility to compare the work with whatever else was on display. Of course painters were never keen to contribute their work to these showrooms.

“It may have been in the interest of the artists collectively to ensure that the market was transparent and that customers were confident that they got value for money, but it could be in the interest of individual painters to take advantage of a customer’s ignorance […]. As a result, there was a tussle between the guild and its members about the creation of market transparency” (p.248).

The guilds also acted as referees in case of a dispute between a painter and his client.

Over time each city developed a limited number of specialties for which they became famous over the country; Utrecht for instance was known for its Italianate paintings (p.249). However it is hard to say to what extend the guild structure helped this clusterization process (p.250).

This entry was posted on Sunday, June 28th, 2009 at 11:54 and is filed under Early Modern, Economic History, Europe, reading notes. You can follow any responses to this entry through the RSS 2.0 feed. You can leave a response, or trackback from your own site.