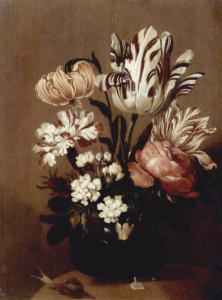 This book can be found on Amazon

The 1636-7 Tulipmania is generally described as a frenzy that led a number of Dutch investors to liquidate other assets to participate in a market for rare flowers whose price was abnormally pushed up by an influx of foreign capital. The investors suddenly realized the irrationality of their position and started selling their bulb whose price collapsed over night (p.27).
Propaganda

The numerous laws passed in the previous 3 decades to ban future trading shows that the early modern Dutch financial actors were used to that type of operation which had to be used for the commerce of bulbs (p.34). However, the ban wasn’t complete and parties could still engage in future trade but their contracts weren’t to be enforced by the state.

The Dutch commercial elite appeared particularly shocked by the fact that the tools they used t raise capital could be used in wild undisciplined and perilous gambles (p.35). As a result they inspired a propaganda campaign which made the Tulipmania larger and more ridiculous than it actually had been. This dark legend inspired most of the accounts about the episode in the following centuries.

“The objectives […] were to channel speculative proclivities into safe areas of the economic activity. Not surprisingly , the safe areas coincided with those controlled by the ruling elite” (p.36)

Landscape for a still-life

Garber also underlines the importance of the context surrounding the episode: a Spanish invasion was looming and a plague had just killed one Amsterdam inhabitant on seven. In other words, the mania was a mere “response to [a] death threat” (p.38).

In 1634, French demand for luxury flowers made for the first time horticulture profitable enough for non-professionals to be attracted by the investment thus spurring demand for rare bulbs (p.43). Trading became so important, that the exchanges did not take place in front of notaries any more but in the less formal and more liquid environment of taverns (named colleges; p.44).

“Typically the buyer did not currently possess the cash to be delivered on the settlement date, and the seller did not currently possess the bulb.” Fictional ownership of a bulb changed constantly, no deposit being required (p.45). Real tulip fanciers seldom get involved in these transactions, which to have been solid would have “required a substantial capital resource or access to the financial credit market” which most of the contractors simply did not enjoy (p.46).

The main tangible innovation of the period was the introduction of sales of common bulbs based of weight (p.47).  February 5 1637, represents the peak of the mania (p.58). qThe bulk of the inflation came not from rarer bulbs (whose price only increased twofold during the last month of the mania) but from the more common one (whose prices tripled or even quadrupled in the last two weeks of January 1637; p.59).

In the same way that the price of individual rare bulbs grew relatively slowly, it also decreased slowly (however the annual depreciation rate could reach 76%, it was usually limited to around 30% over 5 years; p.64). In the 18th century however, the bulbs that had commanded the higher prices had all converged toward a value of 0.5 to 1 guilder, representing 1 to 0.005% of their 1637 value.  Many species having simply disappeared (p.67).

Even though this pattern may seem dramatic, it is actually normal by the standards of the flowers market. Bulbs that had commanded the higher prices in the 18th century could be bought for less than 1% of their value 30 years later (p.68). For a bulb to loose 30% of its value annually ought to be considered normal (p.70). Tellingly, 18th-century hyacinth obeyed the same rule: a rare bulb is very expensive but looses value as the gardeners are able to increase their production (p.71).

The speculative episode of 1636-7 had little impact on the actual production of flowers since at that time the bulbs had been planted and could not be touched before April-May (i.e. after the crash). Further more, even considering that the mania lasted from 1634 to 1637, its impact on production was limited. Gardens remained small and within the limits of the cities’ walls, output thus was unaffected (p.76).

Moreover as the contracts were unenforceable and the state later cancelled many transactions, little wealth actually did change hands, which is inconsistent with the stories of ruin and bankruptcies promoted by later propaganda (p.77). No evidence of a depressed aftermath is found (p.78).

Unlike what the traditional view of the mania describes, the real mystery is the sudden and very significant increase in the price of common bulbs (p.79). The author almost considers that this was a prank:

“These markets consisted of a collection of people without equity making ever-increasing ‘million dollar bets’ with one another with some knowledge that the state would not enforce the contracts. This was no more than a meaningless winter drinking game played by a plague-ridden population” (p.81).

The author goes on to explain succinctly the Mississipi Bubble and the South Sea Bubble as not driven by irrational behaviours but by the best understanding the speculators could enjoy at the time about the fundamentals of the market. Banal rationality explains the early financial crashes much better than crowd psychology (p.124).

This entry was posted on Sunday, July 5th, 2009 at 01:44 and is filed under Early Modern, Economic History, Europe, reading notes. You can follow any responses to this entry through the RSS 2.0 feed. You can leave a response, or trackback from your own site.