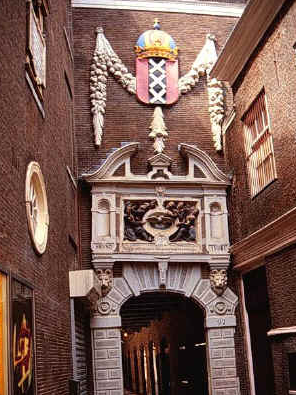 Nonetheless the bulk of the institution’s resources came from its invested endowment (p.153).

Before 1639, little is known about the different types of assets and their returns (p.156). However from that year onwards god records exist and it appears that most of the real estate investments had already taken place.  The majority of the funds had been acquired in the 1580s through the confiscation of catholic institutions’ wealth (p.157). From 1639 to 1661, the regents of the orphanages were committed heavy investment in properties (mostly farms over those 22 years, for a total of 400,000 guilders).

In the 1670s, the Bugerweeshuis, at the request of the municipality, along with two other local charities, allocated important resources (200,000 guilders) to the construction of 63 houses in the newly developed area of Noordse Bosch. This investment added to the institution’s social prestige but above all:

“the magnitude of the total expenditure  leaves little room for doubt that the regents of the Bugerweershuis were deeply committed to the acquisition of rental properties  all through the middle decades of the seventeenth century”.

Despite those acquisitions, as early as 1668, 34% of the orphanage’s incomes came from securities. From 1639 to 1661 nearly 750,000 guilders of new papers and obligations were purchased and almost 700,000 more came from the redemption of standing loans. However the accumulation of obligations and other papers remained more modest than the growth of the real property portfolio (p.159).

Up until the 1670s, the orphanage enjoyed a comfortable surplus at the end of its yearly exercises and its capital stock increased steadily as the regents regularly reinvested their gains (p.164). In particular, real estate allowed the institution to benefit directly from the city’s prosperity as the properties’ value soared.

“Despite the strong historiographical tradition of citing the amazing charitable commitment of the Dutch during their golden age, the evidence presented here suggests that at no time – except perhaps in the distant Catholic past – did charitable giving contribute in a major way to either the endowment or the current consumption.”

Surplus decreased in the 1660s and by 1671 the orphanage had to borrow to cover its expenses. Over the next decade the value of the loans contracted would amount to 170,000 guilders (p.165). The extraordinary expenses consented for the Noordse Bosch development explain in great part this lack of liquidity (p.166).

International and internal strife also contributed to the orphanage crisis (p.167). Indeed, faced with wartime expenses, the government levied a tax on capital in 1673. The orphanage had to pay 7,300 guilders (over six times the usual amount, but much below the 30,000 originally asked). Inflation and high interests on the sums borrowed only made matters worse. Income decreased noticeably, mostly due to defaults by tenant farmers and rents remained law over the decade. As a result, the diet of the orphans over these years of hardship suffered greatly (p.168) and the situation was made worse by the overcrowding that had plagued the institution since the 1650s. The latter also explains the depletion of the cash reserves from 100,000 guilders in 1655 (p.169) to 18,000 in 1667 and a paltry 83 guilders in 1683 (p.170).

Hanging by a thread

“The most striking feature of the regents’ response to the shortfall in income was the tremendous effort made to hold onto the endowment so carefully built up” (p.171).

The fact that the obligations were not sold to repay the debts is easily explained by the fact that the payable loans were bearing an interest 0.5% lower than the securities owned by the orphanage. Consequently:

“it seems likely that in times of extreme stress on the public treasury, such institutional lenders as the Bugerweeshuis were in a better position to absord the risk associated with public finance than were individual lenders. Despite the financial hardships the orphanage […] was still a substantial lender and as such enjoyed opportunities that were either unavailable to small savers or too risky for them” (p.172).

“To maintain this high contribution of asset income to the total budget, the regents were forced to abandoned, or at least modify, their traditional preference for holding property over notes and obligations.”

Tellingly, to pay off their debt, in the mid-1680s, the regents had to resort to sell properties, but left the securities portfolio intact. The 1670s crisis thus led the trustees to shift their preferences to the capital market. In 1699, an audit was conducted to identify the under-performing assets: 16 farms were auctioned (p.175). From 1690 to 1720, revenues from securities grew by 250% while no more investment were made on new properties and throughout the century, the transfer of value between the two classes of assets went on.

Everything needs to change for everything to remain the same

At its peak in 1772, the orphanage endowment reached 2 million guilders allocated as such, securities: 65.7%; Noordse Bosch development: 10.6%; other Amsterdam real estate: 13.2%; and rural properties: 10.3%. The securities brought a return after taxes of 2.7%, slightly more than the what the farms generated. However, at 4.5%, Amsterdam real estate remained the best investment (p.176). Houses owned sometimes from as long as the Alteratie were unsurprisingly never sold but high property values prevented further investment (p.177). Moreover, securities were considerably easier and less time-intensive to manage.

The considerable capital accumulation reached by the mid-18th century indicates that the regents’ strategy ought to have been successful. Some 20,000 guilders were annually invested guarantying ever-increasing returns (while low orphan population limited expenses). Little cash was kept idle and recovered loans were swiftly re-invested (p.178).

After 1770 however the available outlets for the orphanage’s investment became rarer. Resumed inflation also took a toll and wars disturbed the economy (p.180). The upkeep of the properties was as well proving increasingly burdensome. Reserves were depleted and in 1777 the regents found themselves with no available cash and they had to resort to consolidate their portfolio. The year 1785 was particularly catastrophic: the institution’s securities lost some 63% of their value in one go.

As the whole economy was experiencing a severe crisis in the closing decades of the century disinvestment could not provide the necessary funds. To make matter worse, payments on public loans by the Batavian government were divided by 3 in 1810 (p.183). That year, the orphanage’s income dropped to 20% of the level reached the previous year. Severe cuts in the orphans’ diet were consented but, as the city’s finance was also in a sore state, no outside help could be secured and the orphanage stayed in the red from 1801 to 1812.

The money that the municipality did provide from 1778 to 1798 put the previously fully independent Bugerweeshuis under the oversight of the municipality (p.184). In particular the magistrates required a diminution of spending per children. The trend was re-enforced by the secular and centralizing ideology of the revolutionary government . In society at large meanwhile the idea of caritas had been replaced by the demand for social usefulness (p.186).

From its creation (following a single large bequest), the basis of the donors’ consideration had always been of a religious nature (salvation, imitation of Jesus; p.187).

“The shift in the power of the purse affected al aspects of the management of the orphanage. The decreasing importance of charitable giving in the budget of the Bugerweeshuis was not only a product of relative shifts among income sources but also a reflection of the absolute decline in almsgiving” (p.188).

This entry was posted on Friday, October 2nd, 2009 at 00:01 and is filed under Early Modern, Economic History, Europe, reading notes. You can follow any responses to this entry through the RSS 2.0 feed. You can leave a response, or trackback from your own site.