McCants A. (2008) The diffusion of tea and coffee drinking in the 18th-century Netherlands 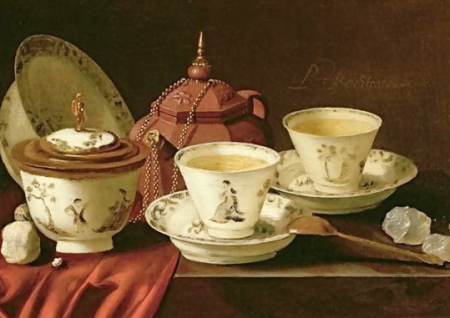 The 17th century saw the introduction of “foods would entirely eclipse the centrality of bread in the rituals of western sociability” (p.172). The idea of a consumer revolution may sound far fetched since the industry lacked the power to reshape the structure of demand and the colonial trade only accounted for 17% of the Dutch international trade at its peak in the 18th century (or 1% of GNP of western Europe and 10% of gross investment; p.173). So were colonial goods (tea, coffee, chocolate, tobacco and sugar), generally considered a significant part of the Industrious Revolution, as important as they are commonly thought to be? END_OF_DOCUMENT_TOKEN_TO_BE_REPLACED

…for a salesman, there is no rock bottom in life……he’s a man out there in the blue riding on a smile and a shoeshine…..
Willy Loman in Arthur Miller’s, Death of a salesman (1948).

The article written by Roy Church entitled “Salesmen and the transformation of selling in Britain and the US in the nineteenth and early twentieth centuries” (Economic History Review, 61, 3 (2008), pp. 695-725) unintentionally provides a partial explanation for the world economic problems of today. In this paper, my focus will be restricted to the US and Britain. END_OF_DOCUMENT_TOKEN_TO_BE_REPLACED

Mary Elizabeth Berry (2008) “Is Consumption Virtuous? The Market Revolution and the Motives for Work in 17th-Century Japan”, conference given at UCLA.

The conference was introduced by prof. Sanjay Subrahmanyam in front of a very receptive audience in the great campus that is UCLA. These are my notes, the construction and the mistakes are mine. The drawing above have been ignominously stolen from the Gütenberg project’s Tales from Old Japan.

Prof. Berry started by reminding the “Tokugawa litany” to the audience: the 17th century was a time of tremendous change in the Japanese economic history; perhaps even more so than the Meiji period.

The population doubled, reaching 30 million. The proportion of urban population went from 3 to 12%. These figure are particularly impressive when one compares Japan to, say, France, which is 3 times larger and almost entirely arable (unlike Japan where at the time only 12% of the landmass could be cultivated), had only 19 million inhabitants. END_OF_DOCUMENT_TOKEN_TO_BE_REPLACED

Historians have shown that despite the image of the Middle Ages as a time of constant hunger, some regions at some periods avaided famine and even manage to feed their population regularly with meat. Germany in the 14th and 15th centuries for instance was under-populated, the best way to use the Wüstungen (deserted lands) was to have cattle grazing on them (in many places consumption close to 100kg per caput per year). This guaranteed a steady supply of meat. During the 16th century, on the other hand, inflation and demographic growth diminished the access the lower strata of the population had to a meat-based-diet. END_OF_DOCUMENT_TOKEN_TO_BE_REPLACED

Definition of the concept

Proto-industrialisation: “the rapid growth of traditionally organised but market-oriented, principally rural industry. It was also accompanied by changes in the spatial organisation of the rural economy” (241). The pattern of European agricultural production, created a massive but short-lived, seasonal demand for labour during the harvest. Journeymen were underemployed during the year, they were an available workforce for the labour-intensive textile industry which needed a lot of workers as its productivity had hardly increased since the 12th century (242). END_OF_DOCUMENT_TOKEN_TO_BE_REPLACED