The evolution of Sicilian banks reflects the history of the island during the early modern period, in that they were “economically and financially backward” (p.91). The 16th century in the Western Mediterranean was a time of Spanish Domination dominated by (1) money clipping, (2) high inflation, (3) commercial mismanagement, (4) Gresham Law episodes fuelled by unscrupulous financiers and (5) heavy and altogether negative government interventions (p.93). END_OF_DOCUMENT_TOKEN_TO_BE_REPLACED

For mercantilists, gold and silver are not just mediums of exchange but the most tangible form of wealth (store of value) and a country’s veritable life-blood. In their view, the economic contraction of the later 14th and 15th centuries were caused by the outflow of precious metal to the East (p.905). But according to J. H. Munro, there was no such thing as a ‘bullion famine’, at worst some “periodic scarcity of coined money” in 1320-1340, 1370-1420, and 1440-1470 (p.906). END_OF_DOCUMENT_TOKEN_TO_BE_REPLACED

“A glance at a map shows what an important role the sea played in the vast empire of the Ottomans in the 18th century, linking as it did the three continents of Europe, Asia, and Africa that made up the Old World. The Ottoman Empire dominated not only the eastern Mediterranean but also the major part of the southern shore of the western Mediterranean, the Black Sea-a “Turkish lake” until the 1780s-the Red Sea, and part of the Arab/Persian Gulf. Geography gave the sea a decisive role in the trade that took place in the Ottoman Empire both internationally and domestically” (p.189). END_OF_DOCUMENT_TOKEN_TO_BE_REPLACED

Greene, Molly (2000) Beyond the Northern invasion: the Mediterranean in the seventeenth century, Past and Present, 174, 41-70 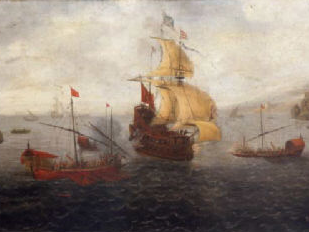 At least since Fernand Braudel, the 17th century is supposed to be the moment the moment the Northern Europeans (English, Dutch and later French) ‘invaded’ the Mediterranean pushing aside effortlessly the old regional powers Spain, Venice and the Ottoman Empire. In this article, Molly Greene shows that it was not that simple, nor one-sided (p.42). END_OF_DOCUMENT_TOKEN_TO_BE_REPLACED

The article is available on line

Cabotage is often defined as a lesser form of maritime traffic. But it can also come to be regarded as a any type of coastal seafaring without preconception about the size of the ships or of the trade they are involved in. During the middle ages this type of traffic was common in the Mediterranean (1). The ships of fourteenth-century Marseille appear to be commonly leapfrogging, even the large ones that could easily use the long haul routes. END_OF_DOCUMENT_TOKEN_TO_BE_REPLACED

Have the Crusadeds followed and used or preceded and triggered the first commercial long-standing relations between the Muslim parts of the Mediterranean world and the Western Christendom (286) ? The documents from the Cairo Geniza cast a new light on this issue (287). These documents reveal “the strong influence of Europe upon he islamic trade as early as the first decades of the 11th century, and even sooner”. END_OF_DOCUMENT_TOKEN_TO_BE_REPLACED

Scheidel W. (2005) Economics of slavery in the Greco-Roman world

Large scale slavery occurs rarely in history, Ancient Greece and Italy are exceptions. Why? The slave population in Athens and Rome can be very roughly estimated at about a third of the total, a proportion consistent with the one of ante bellum Southern USA (2). END_OF_DOCUMENT_TOKEN_TO_BE_REPLACED

Warning: this is the summary of a work in progress; all potential mistakes are mine.

The author’s goal in this paper is to address the question “did the Mediterranean trade networks experience an evolution of their structures as happened in the rest of the world” during the age of global expansion? She uses the Venetian possessions in the eastern Mediterranean – the so-called Stato da Mar from the loss of Cyprus (1571) to the beginning of the War of Candia (1646) as a case study to come up with an answer (1). END_OF_DOCUMENT_TOKEN_TO_BE_REPLACED

This article is available on line.

Coastal traffic (cabotage) was an essential component of the Old Regime’s “circulation economy”. Even in a port as important as Marseille in the 18th century, coastal traffic is a precious complement to long haul seafaring (2). In secondary ports, such as Saint-Tropez, 90% of ships entering the harbour were involved in petty coastal traffic. Most of the rest was also involved in coastal traffic but with more distant places (Italy, Spain, Levant). END_OF_DOCUMENT_TOKEN_TO_BE_REPLACED